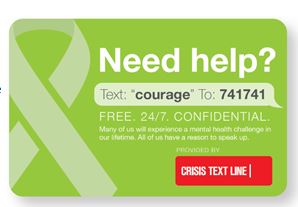 24-hour, toll-free suicide prevention service available to anyone in suicidal crisis. If you need help, please dial 1-800-273-TALK (8255). You will be routed to the closest possible crisis center in your area. With over 120 crisis centers across the country, our mission is to provide immediate Assistance to anyone seeking mental health services. Call for yourself, or for someone you care about. Your call is free and confidential.

24-hour emergency support for callers. Callers are seamlessly connected to an available certified crisis center nearest to their calling location.

The Trevor Project is determined to end suicide among LGBTQ youth by providing life-saving and life-affirming resources including a nationwide, 24/7 crisis intervention lifeline: Other Suicide Prevention Resources

Established to prevent suicide on college campuses and focus on the underlying causes of suicide. Convenes higher education and government leaders as well as scientific research and mental health experts in order to design effective prevention programs that reflect the best in current thinking.

Information and education about suicide and depression, programs for suicide survivor treatment, research, and education.

Provides prevention support, training, and resources to assist organizations and individuals to develop suicide prevention programs, interventions and policies, and to advance the National Strategy for Suicide Prevention.

The National Organization of People of Color Against Suicide (NOPCAS)

Focuses on increasing suicide awareness and education in populations that are racially and ethnically diverse. Additionally, it develops prevention, intervention, and support services to families and communities impacted adversely by the effects of violence, depression and suicide.

Suicide Awareness Voices of Education (SAVE)

A national non-profit agency whose mission is to prevent suicide through public awareness and education, reduce stigma, and serve as a resource for those touched by suicide. SAVE utilizes a national multi-media campaign including television and radio ads, indoor and outdoor media, as well as print ads to raise awareness and educate the general public on the link between brain illnesses such as depression and bipolar disorder and suicide.

A coalition of 11 non-profit, non-religious Samaritans suicide prevention centers in the United States who respond collectively to almost 250,000 calls annually. Its primary purpose is to further the Samaritans principles of befriending people who are depressed, in crisis and suicidal as practiced on or through our volunteer-staffed crisis response hotlines, public education programs and suicide survivor support groups.