You can set your clock by it.

Members of Gavilan’s Computer Science Club cruise into BU 103 right before 11:45 every Thursday morning. For the next hour, they improve their computer and people skills by networking, presenting and learning new technologies.

To a person, the club members stress: you do not need to be a computer science major to be a member of the club. Melissa Gonzalez says she comes in just for fun. “I thought you had to be super smart to be in computer science,” she said. “You don’t. But you do have to be dedicated.”

Anthony Mendoza, current club president, prepared the two most recent presentations. One detailed setting up a GitHub account to enable sharing work with others. Computer science emphasizes teamwork so others have the most current programming available on a project. “As president,” he said, “I facilitate the meetings, prepare the agenda and uphold the club to its mission statement.” 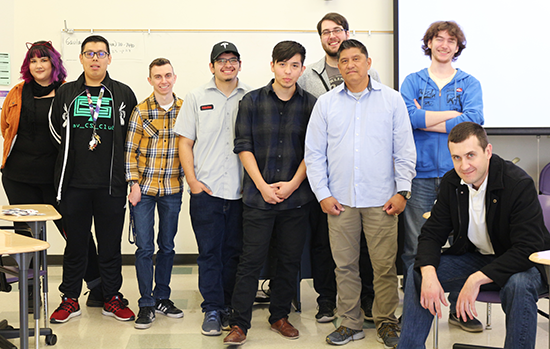 Mendoza, a double major in computer science and engineering, views the two fields as married to one another. “With mathematics, we have our hands,” Mendoza said. “With computer science we have infinitely long ‘arms’ as tools to process so much data.”

Teamwork shows up during club meetings, as members collaborate on the new material being presented or assist with programming.

Club member Erik Burgueño Gonzalez, majoring in computer science with and emphasis in cybersecurity, has taken classes in C++, Java and Python.

“I first started tinkering with computers to see what the field has to offer,” he said. “The world we live in is drastically changing, as is our safety as a nation.” He expressed concern about privacy and robotics in the future. “These fields are evolving, and we need to look at what is best for humanity.” He plans to transfer to SJSU in Fall 2020 and a future career in cybersecurity.

CS student John Lewis hopes to pursue a career in game design, something he has been interested in for a while. “The club meetings help me understand how programs work, and how they all function together,” he said. His current interests are C++, Python and data structures. “Right now,” he said, “I have a serious focus on calculus.”

With a BS in mechanical engineering, John Mendoza returned to college to earn his AS in computer science programming. “I want to work as a programming analyst,” he said. “Perhaps in the financial industry or banking.” As a peer educator, Mendoza also shares what he knows. Mondays through Thursdays he tutors by appointment in the Gavilan College Learning Commons.

Marianna Velasco is a club member majoring in neuroscience, not computer science. “Computer science is going to touch other sciences as they all move forward,” she said. “The possibilities could lead to IP and brain connections, and the machine learning that goes into it.” Velasco views club participation and the weekly presentations as helpful to her future career.

By chance, the founding president of the club, Jonathan Rinfret, dropped by a recent club meeting. “I was not a CS major, but a math major,” he said. “I had to take one programming class as part of my education plan.” He fell in love with programming and took every CS class offered. Rinfret was instrumental in establishing the club and collaborating on developing workshops in UNIX, SQL and other languages. “The workshops gave students a taste of the course material and increased class enrollment.”

Rinfret is currently working on his MS in applied mathematics at University of Washington, a degree that is half math, half programming. His application to the US Department of Defense resulted in a job offer, and he awaits his security clearance.

His return to Gavilan offered an opportunity for some reflection about his academic path. “Walking down Sycamore Lane at this time of year, with the fall colors, brought back a lot of memories.” Rinfret described his time at Gavilan as the best choice possible.

“I had a 4.2 GPA, could have gone anywhere,” he said, “But I didn’t know what I wanted to do.” He described Gavilan as a place to learn from some very smart teachers, learn a lot of programs, and, within the club meet all sorts of different people with different interests, open to collaboration.

“High school students, as they graduate, can feel a stigma about going to a community college,” said Rinfret. “That’s BS.” He described the money he saved, the excellent education he received, the instructors he still keeps in contact with, and the peaceful environment of the campus. “I got my first As in math at Gavilan College,” he said, calling out the influence of educators Ken Wagman, Jennifer Nari and Elena Dachova. “You can excel in the hardest things if you have good instruction and put the work in.”

Students interested in the Computer Science certificate and degree programs and Computer Science club can show up at BU 103 any Thursday morning at 11:45 and learn from other students succeeding in the program. Pizza is often on the menu. And club advisor and CS instructor Alex Stoykov will answer any questions about the department.